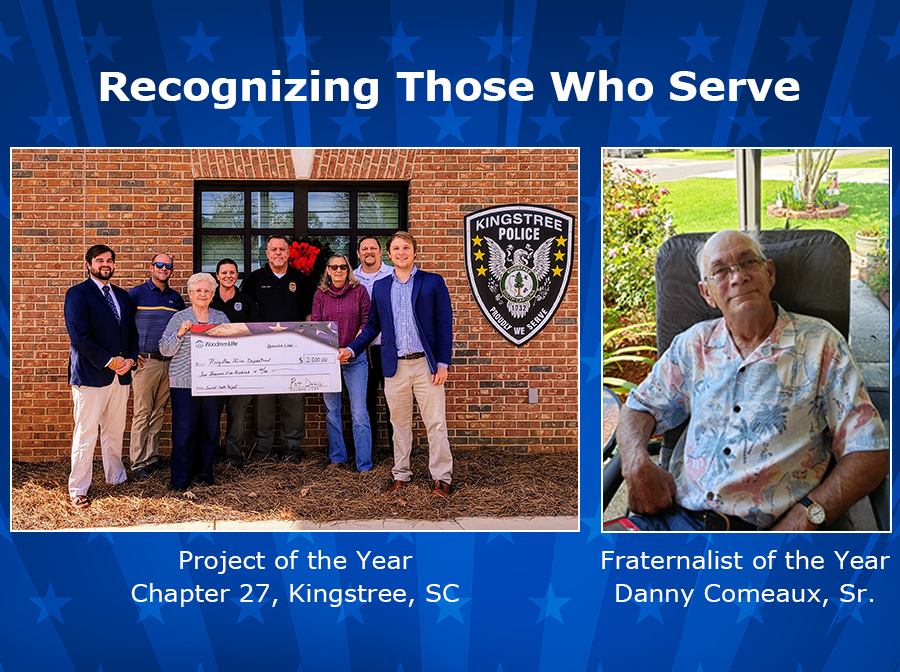 “None goes his way alone; all that we send into the lives of others comes back into our own.”

Since our beginning, we’ve taken to heart these words from Joseph Cullen Root, the founder of WoodmenLife.

In towns where WoodmenLife members1 live and work, we create volunteer opportunities in the community. Our members plan and carry out thousands of service projects each year. We also honor those who make a difference in their communities through volunteer efforts. 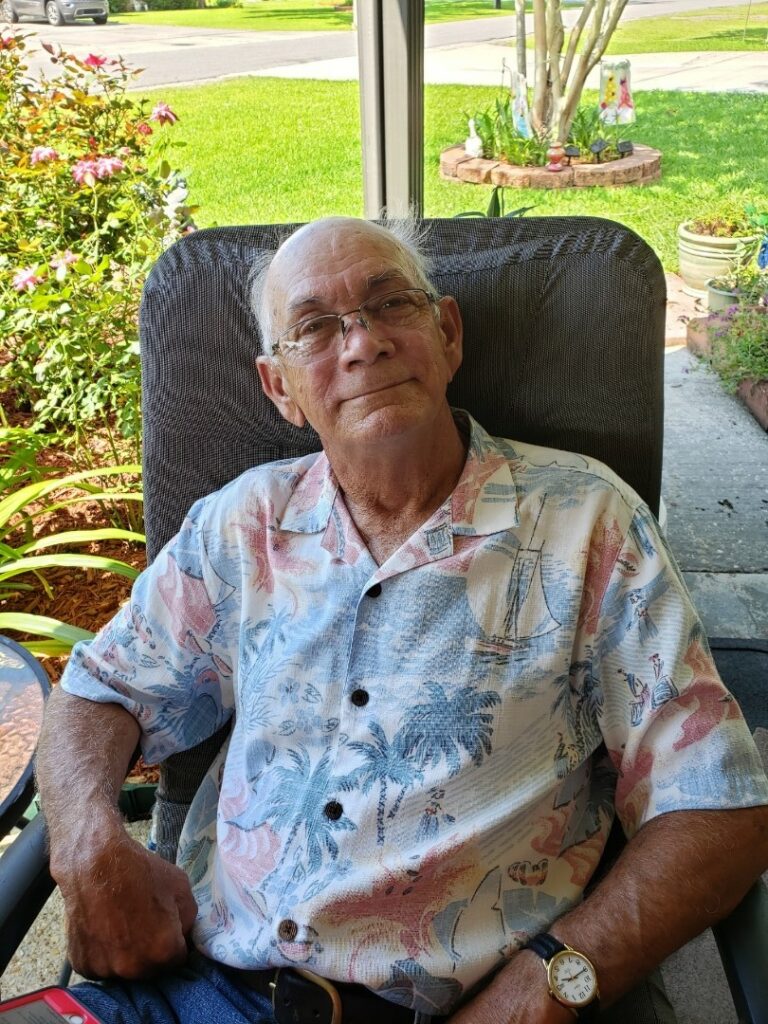 When Hurricane Ida hit Louisiana in August 2021, it caused devastation the likes of which had been seen just once before. It was the second-most damaging hurricane in the state’s history — behind only Katrina in 2005. When it passed, help was needed immediately; in the Houma, LA, area, that help arrived like it usually does — in the form of Danny Comeaux, the 2022 WoodmenLife Fraternalist of the Year.

“Danny was hands-on after Hurricane Ida devastated our area,” said Barbara Elliott, past president of Chapter 308 in Houma.

In addition to tarping roofs and cleaning up damage, she continued, Comeaux “helped rebuild many neighbors’ homes and fed those in need.”

Though many saw him as a godsend, Comeaux sees himself as just doing what needed to be done.

Elliott, in nominating Comeaux as Fraternalist of the Year, has a different view.

“Danny is a visible role model, exemplifying the values, commitment and community involvement of WoodmenLife,” she said. “This draws the attention and interest of people in the community.”

Comeaux was afraid he’d drawn a different kind of attention when he received a message to call WoodmenLife President & CEO Patrick L. Dees.

“I thought I’d done something wrong,” he chuckled. “Why would the head of the whole company be calling?”

So, what was his reaction when he found out why the WoodmenLife President & CEO was calling?

He’s There When He’s Needed – Always

He’s been part of the system for a long time. Comeaux has been a WoodmenLife member for more than 50 years, and he’s served Chapter 308 in many capacities, including as president. He’s currently the chapter vice president.

Every year, he presents WoodmenLife’s American History Award to local students who excel in the subject. He also participates in programs that benefit area food banks and flag presentations to community organizations. Plus, he helps with chapter hall upkeep and drives carpools to activities for people without transportation.

His is a life of giving and serving, something he credits to his daily ritual of reading the Bible and being ready to do whatever he can to help.

“If someone calls and needs something,” Comeaux said. “I’m going to do it.” 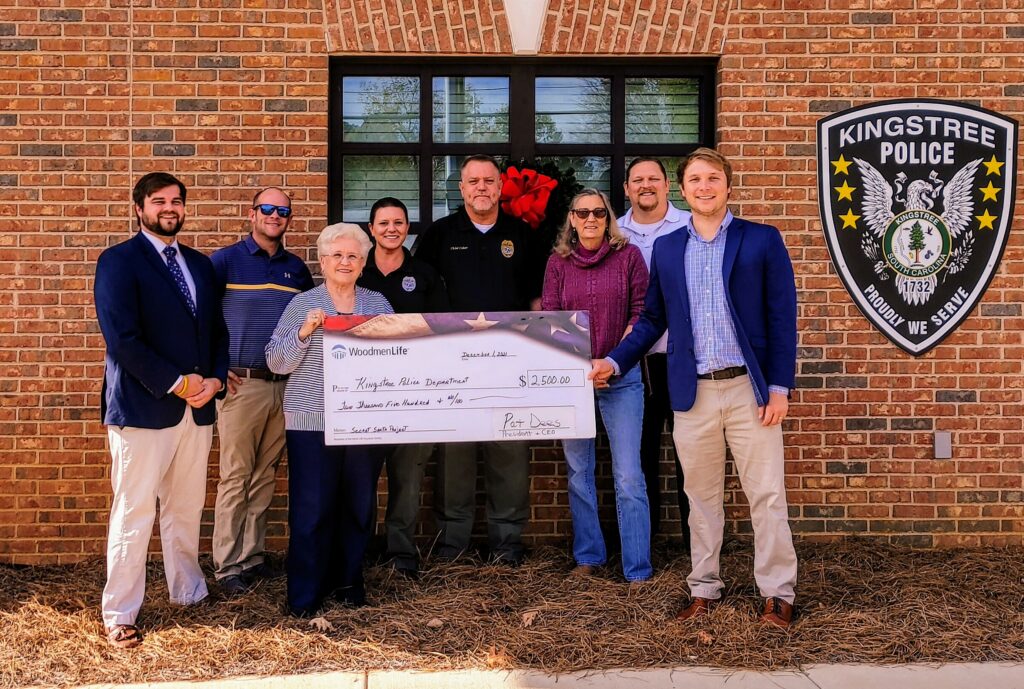 What started as an idea by the Kingstree, SC, police chief to build relationships with local youth became a partnership with WoodmenLife to make a difference in the community last Christmas season. And it ended up being the 2022 WoodmenLife Project of the Year.

“Our police chief has always been supportive of our youth,” said SC Chapter 27 President Brenda Woods. “For this project, he wanted to give gifts to our young people.”

Chapter 27 gladly joined in — not only as a sponsor by donating $2,500, but also as an active participant. Eight chapter members participated in ride-alongs, during which random people were selected to receive gifts.

During one stop in a grocery parking lot, Woods witnessed a scenario that played out all over town. A father with two young children reacted defensively when approached by officers.

“He said, ‘What’s wrong, what have I done wrong?’” Woods said. That defensiveness melted away when police handed gifts to the children. “Then, the little girl reached out and hugged the chief.”

In another encounter, police pulled up to a government housing complex as children got off a school bus. The police turned on their lights, and parents rushed to bring their children inside. But after police communicated that they were there to give gifts to the children, both parents and children were overjoyed.

Another phase of the project involved traffic stops, where officers would hand motorists $100.

“It was just heartwarming to see their faces when they got the $100 bill,” Woods said.

During one of these stops, Woods again saw something memorable.

A woman was pulled over after a long day of work and was disturbed by the encounter. When she found out the real reason for her stop, she was relieved. During the conversation, she volunteered that she hadn’t been able to buy her teenage daughter a gift.

The officer went to his cruiser and brought back a laptop for the woman to give to her daughter.

“She just sat down and cried,” Woods said. “She said, ‘You don’t know what this means to me.’”

For his part, WoodmenLife Recruiting Sales Manager Logan Ingram said he was honored to participate in the project.

around the country,” he said. “They built trust within their community and positively affected hundreds of individuals, which is something you don’t see on TV.

“This was their goal ultimately — they just wanted the citizens of Kingstree to know they are there for them.”

Despite seeing the success and impact of the project firsthand, Woods was still surprised when she learned it was Project of the Year.

Nevertheless, she said, the chapter was “thrilled” with the honor.

1. An individual becomes a member by joining our shared commitment to family, community and country, and by purchasing a WoodmenLife product. 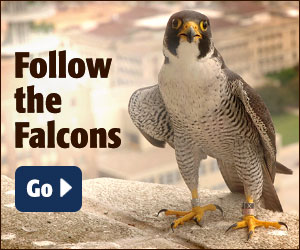